Technology and its (Dis)contents: A (Re)Introduction​ 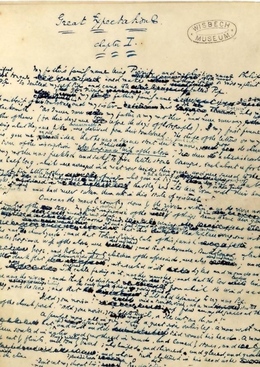 In Dickens at Work, John Butt and Kathleen Tillotson uncover some peculiar compositional techniques of one of the most well-known and prolific novelists in the English language. In their chapter "Dickens as a Serial Novelist," they find that as Dickens composed his most famous work, like David Copperfield, Oliver Twist, and Bleak House, he practiced some odd methods of pre-writing. Along with the author's original manuscripts, for instance, were often included pages folded vertically, creating a kind of primitive split screen. On the left-hand half of the page, he kept memoranda: characters' names, dates, locations; on the right-hand half of the page, he kept the title of the novel he was working on and the division and subdivision of chapters. (1). Like literary forensic scientists looking through carbon-dating samples, Butt and Tilloston looked at the color of ink Dickens used in these manuscripts and came to the somewhat odd conclusion that, "...sometimes he wrote his chapter notes before the corresponding chapter was written, sometimes after" (2). The analysis of these manuscripts also revealed that while Dickens was one of the most prolific writers in English in terms of his literary product, he produced almost no drafts—working on the tight schedule of the serial novelist, his first draft was almost always his final, even after galleys had been sent to him for correction. One is tempted to imagine that Dickens, a writer who is both highly entertaining and complex, had some elaborate pre-writing system, but when asked about his process, he said,

​I never commit thoughts to paper...until I am obliged to write, being better able to keep them in regular order, on different shelves of my brain, ready ticketed and labeled to brought out when I want them.

This record of Dickens' process (or lack thereof) tells students of writing two important things: the process of composition is often non-linear (Dickens wrote notes for his works-in-progress after he had already completed the chapter for which those notes were intended; reviewing and revising often occur while translating and drafting, not after), and skilled writers like Dickens are capable of executing the various processes of writing fluidly, almost subconsciously (he invents nearly everything in his head, without any aid). But even though it would appear that Dickens is a savant, he wasn't a mind alone. He used the technology that was available to him, and benefited indirectly from the explosion in cheap printing that occurred in the eighteenth and nineteenth centuries, without which the serialized novel probably wouldn't have come to be.

Let's take a step back. What is composition, anyway? According to the OED, to compose, in the writerly sense, is closely tied to the old French word compiler, to put together, to collect—the complitator was one who "mixed in a mortar," who, constructed, built, like a builder. The etymological roots of the word ‘to write’ show similar material concerns: ‘to write’ is invariably to inscribe, incise, to mark upon a surface. One cannot build without mortar, cannot write without a tool with which to mark. Because we believe writing is a purely intellectual exercise, we neglect not only the socially constructed aspects of writing practices, but also the technological and material underpinnings of composition. We must remember that writing is first and foremost an embodied act, and a holistic view of the person composing must include the various technologies with which they enhance and extend their physical bodies.

​Flower, Hayes, and the Cognitive Model of Process

In their landmark research on composition in the 80s, Linda Flower and John R. Hayes developed the cognitive model of composition, which starkly contrasted with the previous scholarly consensus that writing was a linear process that unfolded in discrete steps or phases (pre-writing, writing, and revision). In the cognitive model, mental processes such as idea generation and goal setting are considered, and the old organizational triad of composition is replaced by the roomier concept of hierarchical structure: cognitive sub-processes, such as idea generation, are subsumed into larger processes, such as Planning, and these processes are executed nonlinearly (Flower & Hayes 367). The cognitive model, while trying to plug holes in previous composition theory, has its own flaws, and with the rise of poststructuralism and socially- and culturally-based criticism, its popularity has waned in the past several decades. Clearly, the social and cultural are significant lacunae in this theory, and while I agree the cognitive model is imperfect without them, I take issue with something else entirely: its anti-materialism. Specifically, I’m concerned with the model’s lack of consideration for technology’s influence on the composition process. Let us not forget that composition is an embodied act, and everyone who engages in the act of composition does so with and only with the use of physical tools. From the parent hurriedly scribbling a shopping list on a notepad with a pen, to the teenage poet bleeding ink on a muddied composition notebook, and even the graphic designer working on InDesign—all compose with the aid of some tool. Remember Dickens? We may be tempted to dismiss the study of his process, but that's only because today we might consider it "low-tech." A pen and paper, because they've become naturalized, simply can't be considered "technology." In a not so distant future, the tech elite may think the same thing about the word processor—and in an age of virtual reality and near-ubiquitous voice dictation, some (including myself) may think that even the word processor registers a bit low on the scale of technological complexity. But it's exactly this kind of thinking that I want to avoid in this project. Anything that is used to aid composition is a tool. Anything. Writing, as scholars have noted for millennia, is a technology, or techne, if you want to sound like a true academic.

What Am I Looking for?