A Multimodal Exploration of Composition and Technology

​Let's return to the problem (re-)presented in the introduction. How do students use technology while they compose? Using the methodology I laid out in the previous section, I went to two of my peers to find out. As I also mentioned in that section, time and resources were slim, so I narrowed my sample down to the (not statistically significant) size of two of my peers, my friend Mike and my girlfriend Sarah, both of whom are in graduate school working on their MAs and MFAs, respectively. Combining elements of protocol analysis and Keller's multitasking heuristic, I wanted to be as unobtrusive as possible, so I recorded pre-study interviews and used Techsmith relay to capture what the participants were doing on the screen, and in the case of Sarah, my second participant, I was hardly present during the study at all—Techsmith relay simply recorded all the action. Listen to the short clip below for an introduction to my work with Mike. 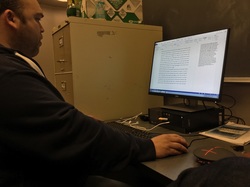 ​After I got Mike caught up on the project and told him a little about what I was looking for, we immediately jumped into the pre-study interview. In these pre-study interviews I wanted to get a sense of what I could expect in my participants' processes, and of course, to see whether they even used technology at all—of course, this being the 21st century, neither composed entirely without the aid of some technology, but who knows, maybe there are those out there who never write outside the margins of their college-ruled composition books. Even though both Mike and Sarah used a range of technologies and exhibited a range of effectiveness in doing so, I was surprised by just how much was going on on their screens. Listen to my pre-study interview with Mike to hear just how complex some of the things he's doing are:
Seeing just how complex his prewriting process was, I was eager to get in and see what he was doing on the screen, so I went back a second time and found him right in the middle of revising the first paragraph of his free-write (which we discuss in the above clip)—not exactly the first paragraph of his first draft, but I decided it would do. While I'll leave my analysis for the next section, I have to say that there is a lot going on in this clip, and I got a great opportunity to apply Keller's multitasking heuristic to Mike's process. ​
​
With just a couple minutes of observation, I was able to begin to see some of the moves that the "digital space" as Mike calls it, allows for. Multitasking shows up while using split screen. The requirements of both long- and short-term memory are lessened by having pithy quotes immediately available in the right-hand screen. Most of all, perhaps, was the constant dance of the cursor. As it bobbed hypnotically, complex processes were occurring—the most recognizable of which was copy and pasting. A pattern began to emerge. And then, just as I was about to pack it up for the day, Mike had a revelation.
​

​After observing Mike compose for countless hours (I spared you from the hours of really tedious stuff), I was ready to move on to Sarah. Luckily, Sarah wasn't hard to get ahold of, because she just so happens to be my partner. I sat down with her at Temple bar to ask her some pre-study questions (forgive the background noise; it was a busy night):
​ 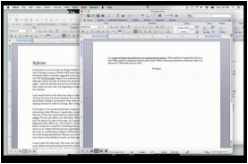 I was somewhat unsurprised, given what I already knew about Sarah, to hear that she didn't have the largest repertoire of digital tools at her disposal, nor was I surprised that Word was her go-to, default word processor, but I think that it's worth noting simply because it demonstrates this sense that our digital tools have become naturalized and normal. Never mind the thousands of lines of code behind a program like Microsoft Word. But, because of the way these programs have been integrated into our lives, they become like second nature, invisible.

When I sat down to watch Sarah, I began to notice some of the same patterns that I saw with Mike. Working only in Word, Sarah performed recognizable actions (tactics) repeatedly. She copy and pasted, she moved text from one document to another, she backspaced and backspaced. Had she been working on a piece of paper, she would have burned through a lot of erasers.
​
​So what does all this mean? Well, I try to make sense of all this in the next section, "Findings and Discussion."