How I Intend to Conduct this Study

​I wanted to learn something about the way that students compose, today, with the superabundance of technology available (or not available) to them. Before I could form a methodology to observe writers as they composed I had to consider some basic presuppositions:

With this in mind, I could start developing a methodology. Inspiration wasn’t hard to find. I only had to look at scholars in the field of literacy studies to find suitable methodologies to adopt for my study. Both Daniel Keller and Deborah Brandt were obvious sources. As I began researching Brandt’s claim that “writing has never been a linear process” I traced it back to Flower and Hayes, who championed the cognition model of process and made heavy use of protocol analysis in their research. Wanting to facilitate a conversation between sources and methodologies, I decided to marry the two, and to reappropriate these methodologies for my own interest in technology’s role in composition. I found that by combining these two methodologies I could still be in accordance with the presuppositions for my study. 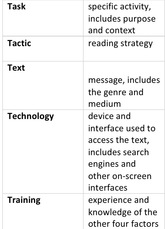 In Chasing Literacies, Daniel Keller has a refreshing take on multitasking. While multitasking is much maligned today, Keller implores us to take a more nuanced view of the practice, and not to give it such a, "blanket condemnation" (1).

In order to analyze multitasking practices with a bit more sophistication, Keller has developed a useful heuristic. Although originally intended to look at multitasking while reading, I've found his heuristic easily and perfectly adaptable to my purposes.
​ ​
I found that, with a few tweaks, the heuristic was well-suited to the sorts of questions I was asking, because it gave me a real tool with which to classify what I was seeing my participants doing. Here's what I came up with: 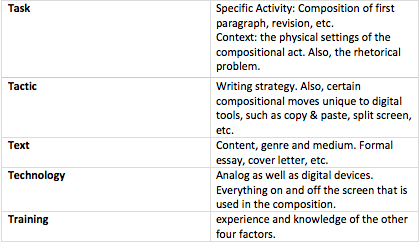 My version of Keller's Heuristic
Protocol Analysis...Sort of

As mentioned in the Introduction, I was also inspired by Flower and Hayes and their use of protocol analysis. Protocol analysis, to my mind, is a good technique for capturing process without getting too much in the way. So what is it? Simply put, researchers ask the participants to perform some task and record them while "work no the task as they normally would—thinking, jotting notes, and writing—except they must think out loud." (2). The transcript, or however these recordings are translated, is called the protocol.

Because of limited time and resources, I don't intend to fully implement protocol analysis. Mostly, I don't have time to transcribe hours and hours of protocol. What I will do, however, is try to recreate the unobtrusiveness of protocol analysis. By using the screenshot and video capture software Techsmith Relay, I will continuously record my sessions with my participants, getting a continuous capture of their composition. I will try and elicit reflection on their part, so that they can comment on what they are doing and why.

By combining these two methodologies, I hope to learn something about the composition practices of my participants. Something meaningful, something that is capable of generation further exploration.